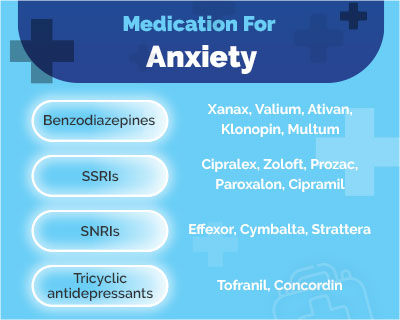 What is Anxiety Disorder?

Fear is an emotion that everyone experiences at some point in their lives. This feeling is a natural part of being human. But when the anxiety persists and interferes with your daily life, you may develop an anxiety disorder.

Anxiety disorder is one of the most common disorders in the field of psychiatry. For example, around 60 million people suffer from it in Europe alone, around 12 million in Germany. Therefore, women are affected much more often than men. Around half of all anxiety disorders go undetected and are therefore not treated properly.

There are several forms of anxiety disorders, including:

If the anxiety disorders are recognized in time, they are all very treatable. Effective treatment options include drug therapy, psychotherapeutic treatments, specialized therapeutic approaches, and lifestyle modifications.

How do you recognize an anxiety disorder?

The cause of an anxiety disorder is often a combination of factors rather than a single element. Possible factors that can trigger this type of mental illness include:

Some symptoms of anxiety disorders that may help your doctor diagnose this disorder include:

These symptoms serve as signs of the anxiety disorder. However, you must see a doctor for a diagnosis.

If you suspect an anxiety disorder, contact your family doctor. If necessary, your general practitioner can refer you to an appropriate specialist (psychotherapist or psychiatrist).

What medications for anxiety disorders?

These are some of the most common classes of drugs that a doctor can possibly prescribe.

Selective serotonin reuptake inhibitors (SSRIs) are the most commonly prescribed antidepressants and are commonly used to treat anxiety disorders. They work by increasing levels of serotonin (a neurotransmitter) in the brain, which regulates mood, sleep, and energy levels.

It can take four to six weeks for SSRIs to take full effect. Side effects include drowsiness, nausea, insomnia, erectile dysfunction and dizziness.

The commonly prescribed drugs from the SNRI class are Effexor (venlafaxine) and Cymbalta (duloxetine). Possible side effects include dizziness, headache, dry mouth, insomnia, constipation and impotence.

It should be noted that tricyclic antidepressants have a delayed onset of action. They can take 4 to 12 weeks to work. Possible side effects include dizziness, dry mouth, constipation, insomnia and rapid weight gain.

Benzodiazepines are a group of drugs prescribed for insomnia and muscle spasms, as well as for panic attacks and anxiety because of their fast-acting anxiolytic and sedative effects.

You should only take benzodiazepines after consulting your doctor. The dosage can vary significantly between individuals. Medications in this group can be taken once a day, multiple times a day, or as needed, and are often prescribed in small doses at first, then gradually increased as needed.

Despite good effectiveness, side effects such as drowsiness and coordination disorders often occur. The best known representatives of this group are Xanax (alprazolam), Valium (diazepam), Ativan (lorazepam), Klonopin (clonazepam) and Multum (chlordiazepoxide).

What medications are used off-label for anxiety disorders?

If one of the above antidepressants does not help relieve your symptoms, then off-label use of medications come into play. Off-label means taking a drug for anxiety even though it is officially approved to treat another condition.

These are some of the meds that can be used off-label for anxiety disorders:

The beta-blockers such as Inderal (propranolol) are most commonly used to treat high blood pressure. They can be used off-label in the therapy of the physical symptoms of acute anxiety, such as palpitations and tightness in the chest.

However, these drugs are unable to improve emotional factors of anxiety, such as worry or social phobia.

Since the beta-blockers only relieve physical symptoms of anxiety and panic attacks, they are often prescribed for stage fright or social phobia.

Buspar is an anti anxiety medication prescribed in 5 mg, 7.5 mg, 10 mg, 15 mg, and 30 mg tablets and is most commonly used during the treatment of generalized anxiety disorder.

It helps relieve anxiety by keeping the serotonin and dopamine receptors in the brain under control.

The first available antidepressants from the group of MAO inhibitors are no longer considered to be the drugs of choice for depression and anxiety. We come into question when other first-choice remedies do not help.

Like most antidepressants, MAOIs work by balancing the brain's neurotransmitters, thereby improving mood. One reason other antidepressants are more popular is that the MAOIs, when combined with certain foods and medications, can lead to high blood pressure. Despite this, they are still very effective for some people.

What are the best medications for anxiety disorders?

Here is a comparison of the most commonly prescribed anxiety disorder medications:

The dosage will be determined by your doctor based on your medical condition, response to treatment, age and weight.

Of course, this is not a complete list of the side effects of all medications that may be prescribed by the doctor. For more specific information, speak to your doctor who can advise you on possible side effects or drug interactions.

Before buying and taking a drug from the SSRI group, seek medical advice. The appropriate medication will be prescribed by the doctor depending on the causes of your anxiety disorder, your personal medical history and your lifestyle. The most beloved SSRI representatives are Zoloft, Prozac and Cipralex.

2. How do antidepressants help with anxiety?

3. What over-the-counter medications can I take for anxiety?

There are no recommended over-the-counter medications for anxiety disorders. To complement the treatment, certain vitamins or dietary supplements may be prescribed by the doctor.

4. How do you feel when you take medication for anxiety?

Some anti anxiety medications work within 30 minutes. Others may take a few days to build up in the body and take effect. After the onset of action, patients often experience a physical sense of relief and less worry and stress - they return to their "normal" life.

Occasionally, patients experience such side effects as headaches, nausea, and fatigue in the first few weeks after taking it. However, many patients find that these side effects go away over time.

5. Can Medication For Anxiety Lead to Weight Loss?

There are some reports of anti anxiety medication causing weight loss, while other reviews mention weight gain. In this case, more research is needed to understand exactly how the anti-anxiety drugs affect a patient's weight.