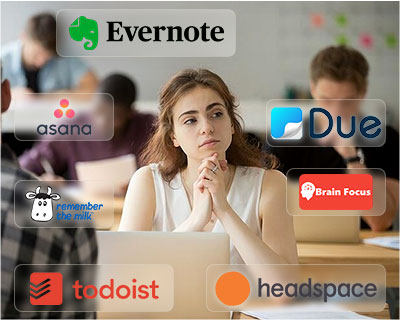 The COVID-19 pandemic has changed the way people live and work around the world. The isolation and insecurity that has persisted over the past year has been a real challenge for everyone. The pandemic has had a particularly severe impact on the lifestyle of people with Attention Deficit Hyperactivity Disorder (ADHD).

"Many patients who have the attention deficit disorder have found that they have difficulty working from home due to competing demands and/or distracting factors," said Matt Gemstone, psychiatrist, a licensed psychologist in Maryland.

“ADHD is an attention deficit disorder in which tasks are difficult to begin and complete. Time management leaves a lot to be desired,” says Doctor Sonia Parikh, Psychiatrist and Chief Physician at SavantCare.

According to the American Journal of Psychiatry, the worldwide prevalence of adult ADHD is approximately 5%. The condition is often treated with a combination of medications — usually stimulants like Adderall, Ritalin, or Concerta — and lifestyle changes. You can view and compare all ADHD medications here. Most adults with ADHD benefit from working with a qualified therapist or life coach to develop time management and organizational strategies and to deal with symptoms such as forgetfulness, trouble concentrating, restlessness and disorganization.

There are also a variety of productivity apps that can help people with ADHD stay focused not only in the office but also at home.

If used correctly, modern technologies can be helpful. "There are many tools that are useful for helping individuals remember their daily expectations, create to-do lists, and set reminders for tasks," says Juwel. "The most important thing is not to get so involved in the use of technology that these devices can distract you."

Mobile devices and social media distract from work. On the other hand, certain apps can actually help some people with AHDS stay focused, productive, and organized. With these tools, one can easily track tasks, create to-do lists, set reminders, and improve mindfulness to draw attention to productivity.

Evernote is a very popular app to organize the ideas. You can search for ideas, set reminders, save data from the web, and keep your lists and notes organized. These are a useful tool for people suffering from ADHD as it can minimize distracting factors when switching between open lists and apps. Evernote can be used for Google Drive, Gmail, Slack, Outlook and other popular application tools.

Evernote on Google Play and the App Store

Remember The Milk is a great to-do list making app with many additional features like reminders, notes, and lists. Remember The Milk integrates with a variety of other programs such as Google Drive and Dropbox. This app has a variety of features to help users stay organized such as: B. Color-coding and reminders synced to text messages, email, and other programs like Twitter.

Remember The Milk on Google Play and the App Store

dr Parikh recommends Brain Focus as an app for ADHD patients. It is based on the Pomodoro Method's time management technique, a system that sets short periods of time for work and gives small breaks as rewards. This app is ideal for those who are easily distracted as Brain Focus turns off the WiFi and the sound while you are in the work session. This is also an ideal tool for tracking how much time you spend on each task. Users also have the option to group and organize the respective tasks by categories.

Brain Focus on Google Play and the App Store

Due is an app highly rated and recommended by both experts. It's popular in the App Store, probably due to its simple interface. Due has an automatic snooze feature, but it will continue to remind you until you've marked your tasks as complete. This is good news for those patients with ADHD who can easily switch off the first reminder. Due also has timer function which can be very helpful for those who are easily distracted at work.

Due on the App Store

dr Parikh also suggested Asana as another health worker for ADHD. Asana allows users to create a workflow with actionable list items for each project, which is a very useful feature for ADHD people. Breaking tasks down into small steps can help adults with ADHD not feel overwhelmed about where to start — and then hesitate. This is an app that is widely used by teams to organize the work processes. It can also be used by individuals to prioritize their tasks and lists.

Asana on Google Play and the App Store

With Todoist, you can create lists and notes, track tasks, and organize and collaborate on projects. This tool also offers the possibility of integrating other apps so that you don't miss anything by dividing your priorities between different programs. In this to-do list app, it is also possible to track progress with personalized productivity trends.

Todoist on Google Play and the App Store

Headspace has a 4.9-star rating on the App Store, and its popularity comes as no surprise to those familiar with it. Despite not being a productivity app, Headspace makes this list because it helps users become more mindful and relieve stress. If you suffer from ADHD, then take advantage of the available meditations on topics such as focus, sleep and exercise.

There is a link between ADHD, anxiety and depression, and adopting a meditation practice is an alternative treatment that can help people manage their symptoms.

Headspace on Google Play and the App Store

Apps can be helpful, especially when combined with other organizational strategies. Edelstein believes that many tools that come standard on most modern smartphones, such as alarms or reminders, can get rid of the disorganization in conditions like ADHD and improve attention. He even recommends his patients have a separate device for productivity tools.