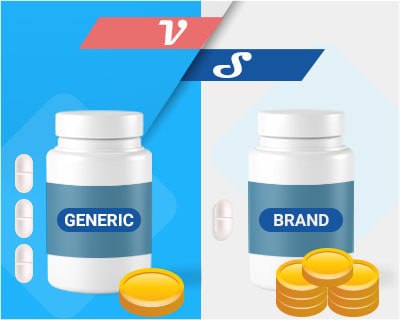 Pharmacies nowadays offer a large number of medicines at different prices. The preparations with the same active ingredient can vary dramatically in price. This difference depends on whether the drug is branded (original) or generic.

What is the difference between generic and brand name drugs?

The branded drug, also known as the original drug, is a patented drug that was manufactured on the basis of a new pharmaceutical formula. The active substance of such a drug is protected by the patent for a period of 5 to 20 years. The development of an original preparation can take several years.

Once the patent rights have expired, any pharmaceutical company can use this active ingredient to produce its own "version" of the drug, a so-called generic.

What are generics? These are the medicines that contain the same active substance as the original preparation, differ in the auxiliary substances and manufacturing technologies. These drugs are also known as generic drugs.

Brand name and generic drugs can also differ in packaging, dosage form and dosage. The generic usually bears the name of the active ingredient and the name of the manufacturer. In contrast to the original medicine, the generics cost less. This is easy to explain. The generic drug manufacturers do not spend the costs for development, advertising and research since the effectiveness and safety of the active substance was already proven during the development of the original drug.

Why are generic drugs cheaper than brand name drugs?

When choosing between the generic and the brand, many prefer the cheaper knock-off products. The low price of a generic drug is explained by the fact that the pharmaceutical company did not spend money on the invention, verification of the safety and effectiveness of the active substance.

If the manufacturer manages to buy the raw material cheaply, excluding some components or changing them without losing the effectiveness of the drug, then it is possible to sell the drug at a low price.

The price of the generic drugs can be reduced by optimizing the tax costs. Copycat products are often produced in India and China, where employee wages are lower. The high quality of the drug is maintained.

Why can generic drugs be less effective?

The generic drug has the same active ingredient as the branded drug and should therefore be just as effective. However, this is not always the case. Less effectiveness can be observed in cases where the manufacturer uses other excipients, the composition of which differs from the original. As a rule, these are inert components that do not have a therapeutic effect. This can lead to allergies or individual intolerances occurring in patients.

In clinical studies, the excipients of a generic drug cannot show their negative effects. But later, when the drug is used in practice, it can be noticed that the side effects are more pronounced or the drug is not effective enough. This can increase the dose of the drug and increase the risk of side effects.

Is it worth buying generics instead of branded ones?

Generics cover about 60% of the total drug market. Due to their low prices and good efficiency, they are better bought than the originals by different groups of buyers.

For most diseases, it doesn't matter what type of drug is used. Diclofenac works just as well against pain and inflammation as Voltaren. And no one thinks about which drug was invented earlier, and which was invented later.

In pharmacology, however, there are drugs that are subject to increased requirements. These are the drugs used to treat cancer patients undergoing chemotherapy, as well as most antibiotics.

It is your choice which drug to buy online. However, remember that each drug has its own advantages and disadvantages, as well as contraindications for use in some individual cases. Buy the drugs only after consulting your doctor and do not self-medicate as it may harm your health.