What you need to know about antidepressants? 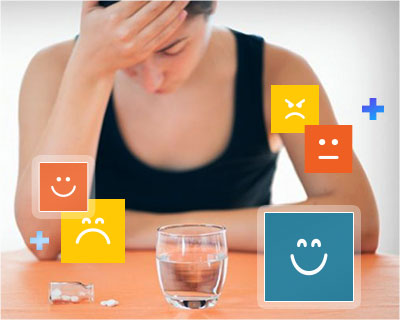 How do antidepressants work?

What antidepressants are there?

How long does it take for antidepressants to work?

In general, antidepressants work very well, especially when used in conjunction with psychotherapy. This combination can produce better results than using either treatment alone. Most people who take antidepressants claim that they feel a significant improvement in symptoms such as sadness, loss of interest, and hopelessness. However, the antidepressants do not work immediately. It may take 1 to 3 weeks or more to feel better and even longer to see the full effect.

What to do if the antidepressants don't work?

Talk to your doctor if your symptoms haven't improved after 3 months. You may need a stronger dose or a different antidepressant.

Is a generic drug as effective as a branded one?

The EMA-approved generics are just as effective as the branded ones. Both drugs have the same active ingredient. Ask your doctor if you can take the generic form of a drug because the generics are cheaper.

How Long Should Antidepressants Be Taken?

Take your antidepressants for as long as your doctor tells you (usually at least 6 months). Continue treatment even if you feel better as your depression may return.

What to do if you experience the side effects of antidepressants

If side effects occur, tell your doctor about them. There are often ways to keep them under control.

For example, taking an antidepressant with a meal can help with nausea. If you have sexual problems as a side effect, another antidepressant medication is usually prescribed.

If you're feeling tired, try taking the antidepressant 1 to 2 hours before bed. If the drug causes insomnia, take it in the morning. Many side effects go away on their own after a few weeks.

What to do when you have suicidal thoughts?

Some people may experience suicidal thoughts as a side effect of antidepressants, especially in the first few months after taking them. It may also take a few weeks for the antidepressants to start working. And depression itself puts you at risk for suicidal thoughts. Therefore medical control is required. If you intend to harm yourself, contact your doctor or therapist immediately.

The antidepressants most commonly used today have fewer side effects and drug interactions than older drugs. Still, any antidepressant can interact with other medications. Tell your doctor about any new prescription drug, over-the-counter drug, or dietary supplement you plan to take. These can affect how well your depression medication works.

It's important to keep all your doctor's appointments while you're on antidepressants to prevent a relapse. If symptoms of your depression return, either the dose may be changed or a new medication may be prescribed. Be sure to tell your doctor about any major changes in your life, such as: B. the loss of a job, the development of another disease or pregnancy.

Taking antidepressants can make you nervous. To get rid of the jitters, try a relaxing workout like yoga or deep breathing exercises. Your doctor may prescribe you another antidepressant if this does not help.

What are the myths about antidepressants?

Another myth is that you have to take the medication for life. Typical antidepressant treatment lasts 6 to 12 months in people who have had only a single episode of major depression. However, you may need longer treatment if you have had multiple depressions in your life. Even if you've heard that antidepressants cause physical dependence, that's not true. Nevertheless, unpleasant symptoms can occur if you suddenly stop taking it.

What are the advantages of psychotherapy?

Exercise releases endorphins. Endorphins are the chemicals associated with improved mood and elimination of depression. Several studies suggest that regular exercise is an effective treatment for mild to moderate depression. Group training or training with a partner can also be helpful.

How do you stop taking an antidepressant?