Instructions for use Zoloft 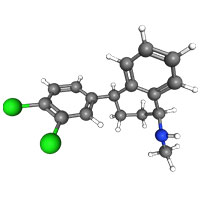 The drug Zoloft has a mood-enhancing, activating and anxiolytic effect. The active ingredient sertraline inhibits the reuptake of serotonin. This leads to an increase in the amount of serotonin between brain cells.

The tablets should be taken with a glass of water at the same time each morning or evening. It does not matter if this medicine is taken before or after the meal.

The dose depends on your age, condition and whether or not you are taking other medicines.

For depression,the usual starting dose for adults is one 50 mg tablet a day. The dose can be gradually increased up to 200 mg per day if needed.

For the treatment of OCD in children between the ages of 6 and 12, the usual starting dose prescribed is 25 mg per day, which is half a 50 mg tablet. Adults and adolescents aged 13 to 18 should initially take one 50 mg tablet daily.

When adults suffer from panic disorder or social phobia, the usual starting dose of 25 mg per day is prescribed. After a week of treatment, the daily dose should be increased to 50 mg.

Depressive disorders are usually associated with an increased risk of suicide, suicidal thoughts and suicide attempts. Therefore, patients should be monitored at the start of treatment and after dose adjustments.

Zoloft is not suitable for children and adolescents under the age of 18, with the exception of patients with OCD aged 6 to 17.

Simultaneous use with pimozide

If you miss a dose, do not take twice as much the next time, but take it as described in the dosage instructions or as instructed by your doctor

If you take more than you should, gastrointestinal upset may occur.

The medicinal product must be stored away from heat.

What is the name of the active ingredient in Zoloft?

The active substance is called sertraline. Sertraline belongs to the class of selective serotonin reuptake inhibitors.

In which dosage forms can you buy Zoloft?

It is available as film-coated tablets and concentrate for oral solution.

In what strengths can you buy Zoloft film-coated tablets?

Zoloft is commercially available as 50 mg and 100 mg film-coated tablets.

What does Zoloft price depend on?

The price primarily depends on the dosage and package size in which you buy the drug Zoloft. It also matters where you buy it. Internet pharmacies usually offer Zoloft cheaper than on-site pharmacies.

Can you buy Zoloft over the counter?

No, Zoloft medication is only available with a prescription from a doctor.

Why to buy Zoloft?

Zoloft is an antidepressant and belongs to a group of medicines called selective serotonin reuptake inhibitors. Its active ingredient blocks the reuptake of a chemical called serotonin in nerve cells in the brain.

Zoloft medication is used in the following cases:

This medicine can only be obtained with a prescription. There is no evidence that Zoloft is addictive.

Where to buy Zoloft cheaply?

Zoloft is considered a prescription drug in most countries. You will not find a local pharmacy that sells Zoloft tablets without first submitting a prescription.

Zoloft's price range is relatively wide depending on who makes it and who sells it. The price also depends on dosage and package size. In the stationary pharmacies this drug can be very expensive. If you want to buy Zoloft cheaply, choose an online supplier. There are numerous online vendors that sell Zoloft online. But not all of these ISPs can be considered as good quality sources. That's why you have to choose a reputable provider that you can trust.

What is the difference between Zoloft and Sertraline?

Zoloft medicine is one of the trade names of sertraline. In addition to Zoloft, sertraline is marketed under the names Sertra, Sertralon, and generic sertraline. The differences between Zoloft and sertraline are in a few aspects like name, appearance and price; in others such as in the active ingredients and function, there are almost none.

Can you gain or lose weight on Zoloft?

Some antidepressants are able to increase body weight. Zoloft medication, as a rule, rarely increases body weight. Only 17 percent of the patients who shared their experiences with Zoloft on the health portal Sanego experienced weight gain. Like other SSRIs, Zoloft can often cause unwanted weight loss.

What side effects are possible after taking Zoloft tablets?

The most common side effects in adults treated with Zoloft are:

In children and adolescents treated with Zoloft, side effects were generally similar to those in adults, with the following additional side effects: nosebleeds, bladder weakness, aggressive reaction, and weight change.

Some side effects can be serious. If you experience any of the following symptoms, call your doctor right away:

Zoloft tablets can also cause other side effects.

What medications does Zoloft interact with?

Some medicines can interact with the drug Zoloft and affect its effectiveness.

Before buying and taking Zoloft, tell your doctor or pharmacist if you are taking any of the following medicines:

Some drug combinations can increase the risk of serious side effects and are potentially life-threatening. Provide information about all prescription and over-the-counter medications you are taking or using.

I've been on Zoloft for almost two months and I give this drug a 5 out of 5 because I feel great about it! At the same time as taking this medication, I created my own treatment plan: I drink 2 liters of water a day, sleep for 8 hours, have cognitive behavioral therapy, have avoided alcohol, caffeine and sugar. I eat a lot of vegetables, fish, fruit and nuts, exercise 3 times a week, take vitamin D, B12 and magnesium. All this helps me well against depression.