Instructions for use Voltaren 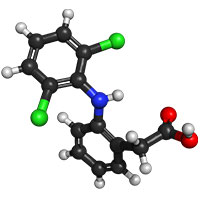 Voltaren is a non-opioid analgesic that has pronounced analgesic, anti-inflammatory and antipyretic effects.

The main active ingredient in Voltaren is diclofenac. Its mechanism of action is through inhibition of prostaglandin biosynthesis. The prostaglandins play an important role in the development of inflammation, pain and fever.

In rheumatic diseases, due to the anti-inflammatory and analgesic properties of Voltaren, such manifestations of diseases as pain at rest and on exercise, morning stiffness and joint swelling are relieved.

With post-traumatic and postoperative inflammation, Voltaren quickly relieves pain (both at rest and during movement), reduces inflammatory edema and edema of the postoperative wound.

The dose is selected individually. It is recommended to use the drug in the minimum effective dose. The tablets should be swallowed whole with plenty of liquid, preferably 1-2 hours before a meal.

Voltaren Dolo 25 mg : The recommended starting dose is 25 mg. Another single dose of 25 mg is taken 4-6 hours apart. The total daily dose should not exceed 75 mg.

The drug should be taken as soon as the first symptoms appear. Depending on the dynamics of the clinical symptoms, the treatment can last up to 4 days.

Before taking Voltaren consult your doctor if you suffer from liver problems.

Before taking Voltaren tablets, seek medical advice if you have kidney problems.

Caution is advised if you have or have ever had heart problems.

Taking Voltaren with meals reduces the absorption of diclofenac.

How long can you take Voltaren tablets?

Voltaren tablets should only be used for a short time. Without consulting a doctor, the tablets should be taken for up to 4 days for mild to moderately severe pain.

What are Voltaren tablets for?

What do Voltaren tablets do?

The active ingredient diclofenac inhibits the tissue hormones, which alleviates the inflammatory processes and pain, and reduces fever. It also has an antirheumatic effect.

How expensive are Voltaren tablets?

The price of Voltaren tablets depends on a pack size and dosage. The price also depends on what kind of drug you are buying, ie which manufacturer produces it.

Are Voltaren painkillers stronger than ibuprofen?

The differences between these two drugs are primarily in the strength of the dosage, with Voltaren being the stronger of the two drugs. Aside from its topical form (a gel that is applied to the affected areas), Voltaren is available in high dosages by prescription only (25mg is over the counter). Voltaren painkillers in dosages of 50 and 75 mg are usually used for mild or moderate pain associated with the following diseases: osteoarthritis, rheumatoid arthritis, menstrual cramps. In contrast, ibuprofen is suitable for a wider range of ailments. Its over-the-counter form with a strength of 200 mg provides temporary relief for mild pain associated with: Headache, Fever, Back Pain, Mild Arthritis Pain, Toothache, Muscle Aches, Menstrual Cramps. You can buy Voltaren tablets with a potency of 25 mg and Ibuprofen with a potency of 200mg-400mg without a prescription. In higher strengths, both drugs require a prescription.

Which dosage form of Voltaren to choose?

The main advantage of Voltaren (Diclofenac) is the variety of dosage forms, including tablets, solution for injection, suppositories, hard capsules, as well as forms for local therapy such as gel, ointment, cream, spray and patch. There are also eye drops. The ability to combine the different routes of administration in the same patient reduces the risk of side effects.

The Voltaren® 100 retard retard tablets are a special form of administration. Due to the delayed release of the active substance when taking retard tablets, the effect occurs later, but lasts longer. Taking such prolonged-release tablets makes it possible to reduce the number of doses (once instead of twice-three times a day), while maintaining a stably high concentration of the drug in the focus of inflammation. Thus, Voltaren in the form of prolonged-release tablets is preferably prescribed for long-term therapy.

The solution for injection is usually prescribed when a rapid analgesic effect is required, mostly in the case of severe acute pain (in the case of renal or hepatic colic, acute pain due to a bruise or sprain, acute back pain or postoperative pain). The pain in this case is relieved within 15-30 minutes. One injection solution per day is usually prescribed. However, in severe cases, 2 injection solutions per day with an interval of several hours can be prescribed.

The use of solution for injection can be combined with other dosage forms of Voltaren. Parenteral administration should not last more than 2 days. If necessary, treatment is continued with the same Voltaren, but in the form of tablets or rectal suppositories.

The suppositories are often used in combination therapy. During the day, the patient receives either injections or tablets, and at night - suppositories, which gives a better therapeutic effect due to more even and long-term maintenance of the plasma level of diclofenac. Therefore, the total daily dose of diclofenac should not exceed 150 mg.

A combination of two or more non-opioid analgesics should be avoided as their effectiveness remains unchanged and the risk of side effects increases.

Voltaren Dolo in tablet form is taken to relieve mild to moderate pain. The active ingredient in Voltaren tablets is called diclofenac. The package insert for Voltaren Dolo 25 mg states that these painkillers are suitable for adults and adolescents aged 14 and over.

Film-coated tablets Voltaren 50 mg are prescribed to relieve pain and inflammation in rheumatic diseases. They are also used for post-traumatic painful inflammation, such as after sprains. The film-coated tablets are used to treat painful spinal column syndromes, extra-articular rheumatism, an acute attack of gout and primary dysmenorrhea, as well as to relieve pain and inflammation or swelling after injury or surgery. Other uses include fever and the painful, inflammatory conditions associated with gynecological diseases.

Use our drug comparison portal to learn more about drugs , as well as compare their prices from different providers.

Are Voltaren tablets available without a prescription?

Voltaren tablets are available in pharmacies in low doses without a prescription. For example, Voltaren Dolo 25 mg is sold over-the-counter. High concentrations of Diclofenac in Voltaren require a prescription.

Buying Voltaren for external use does not require a prescription.

What ingredients are in Voltaren tablets?

What are the side effects of Voltaren tablets?

Below are the side effects of Voltaren tablets that have been identified in clinical studies as well as in the use of diclofenac in clinical practice.

Information on the frequency of side effects:

Other side effects: rarely edema.

I take Voltaren Dolo whenever I have a slight pain. I like it very much.