Instructions for use Vermox 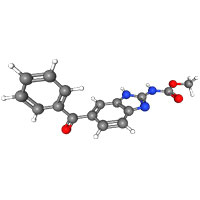 The Vermox anthelmintic contains the substance mebendazole, which prevents the worms from absorbing the sugars that are essential for their survival. This depletes the worms' energy stores and leads to their death within a few days. The dead worms are then passed out of the intestine with the stool. Although the active ingredient mebendazole kills the adult worms, it does not kill their eggs. It is therefore very important to follow the hygiene measures very thoroughly even after the treatment. This will help prevent you from swallowing eggs, which can then lead to the new worm infection.

Vermox can be taken with a meal or on an empty stomach. The tablets can be crushed or chewed if necessary to make them easier to swallow. The dose of Vermox depends on the type of worm infection.

For the treatment of pinworms, adults and children over 2 years old should take one 100 mg tablet on the first day, then one tablet 2 weeks later and a third tablet 4 weeks after the first tablet. The first dose kills the worms but not the parasite eggs. The second dose will get rid of any worms that may have hatched from the eggs. The 3rd dose ensures that all worms are gone.

To treat other types of worm infestations, patients should take Vermox 100 mg (1 tablet) twice a day for 3 days. If symptoms persist after 3 weeks, a second course of treatment may be postponed.

The dosage is related not only to the type of infection, but also to the patient's body weight, presence of concomitant diseases and use of other medications.

In the case of liver dysfunction, Vermox tablets should only be taken with particular caution and after a strict benefit-risk assessment by the doctor.

Simultaneous administration of Vermox 100mg and metronidazole should be avoided. Caution is advised when Vermox tablets are taken concomitantly with immunosuppressants, especially glucocorticoids. Because of the interactions, this combination is recommended.

No interactions with alcohol

Store in the original package in order to protect from light and moisture.

Vermox when are worms dead?

Vermox 100mg vermifuge does not kill worm eggs. For this reason, another dose should be taken 2 weeks later to prevent re-infection.

How fast does Vermox work?

Vermox tablets should work immediately. Please note, however, that it may take several days before you become worm-free.

How does Vermox work?

The active ingredient in Vermox attacks the intestines of the worms and prevents them from eating. This will kill the worms. After a few weeks, the worms are passed out of the body with the stool.

How much does Vermox cost?

Vermox price varies from supplier to supplier and depends on Vermox dosage and package size.

Can you buy Vermox tablets without a prescription?

You can buy Vermox at the pharmacy for adults and children over 2 years old. It is only available by prescription. There are also other commercial preparations with the same active ingredient: Vermox forte 500 mg, Pantelmin, Surfont.

Can you buy Vermox online?

Vermox is available commercially in the form of 100 mg tablets and 100 mg suspensions in 5 mL. It contains mebendazole as an active ingredient.

Are Vermox tablets available over the counter?

Throughout Germany, as well as in many other EU countries, Vermox requires a prescription. This means that you cannot buy Vermox without a prescription. However, many internet pharmacies offer Vermox over the counter. Caution is advised as there are many counterfeit medicines on the web. By buying Vermox , you are choosing a reputable online pharmacy.

Vermox or Helmex: which is better?

The effectiveness of Vermox (active substance mebendazole) and Helmex (active substance pyrantel) was examined in two groups of 59 and 58 cases of patients with intestinal parasitosis. Mebendazole had a success rate of 96%, 82.2%, 71.4%, and 66.6% in the treatment of roundworm, hookworm, Trichuris trichiura (trichuriosis) infection, and dwarf nematode, respectively. The corresponding success rates of pyrantel were 92.6%, 85.7%, 19.4% and 0%. Pyrantel (Helmex) is believed to have no significant effect on Trichuris trichiura and dwarf nematodes. Neither drug had any effect on beef tapeworms.

Helmex (Pyrantel) is recommended to be used as a drug of choice in several parasitic infections except for Trichuris trichiura and dwarf roundworms. For those patients who have Trichuris trichiura and dwarf roundworms, Vermox (Mebendazole) is more suitable. Vermox can be prescribed for the patients with clinical evidence of worm infections even if stool examination is not possible because it covers almost the entire range of common worm infections.

Is it safe to take Vermox during pregnancy?

The safety of use during pregnancy has not been established. The manufacturer states that this anthelmintic should not be taken by women who are pregnant or think they may be pregnant.

Studies involving around 1,650 women who took Mebendazol Vermox 100mg during the first trimester found that these women did not appear to be more likely to have a baby with a birth defect.

Studies in a small number of pregnant women taking mebendazole in the first few weeks of pregnancy have not shown an association with miscarriage.

A study of around 2,500 pregnant women taking Vermox found no association with stillbirth, premature birth (less than 37 weeks gestation) and very low birth weight (less than 1,500g) for the baby.

Since little information is available about the safety of Vermox tablets in pregnancy, the hygiene measures for the treatment of worm infestation in early pregnancy should be observed if possible and Vermox should only be used after the first 12 weeks of pregnancy.

If your doctor prescribes mebendazole-containing preparation Vermox during pregnancy, it is because the benefits outweigh the risks.

Is Vermox anthelmintic suitable for children?

Mary Jackson
Master student
She studies medicine at the Institute for Translational Immunology (TIM). Since 2021 freelance author at Compharms.
Linkedin

After receiving several anti-worm medicines and nothing really helped, I tried Vermox. Yes, I was struggling with nausea and stomach ache and even had to throw up in the evening, but after that my subtenants finally left.