Instructions for use Valium 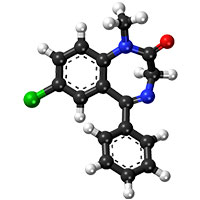 The active ingredient in Valium diazepam has a powerful sedative effect on the body as it acts on the brain's benzodiazepine receptors and increases the effectiveness of gamma-aminobutyric acid (GABA). The drug also possesses muscle relaxant, anxiolytic, antispasmodic and anti-tension properties. In addition, Valium reduces the symptoms of acute alcohol withdrawal, such as tremors and anxiety.

Valium is widely used to treat:

The dosage of Valium should be determined individually by the doctor and depending on the condition, in order to avoid motor impairment or excessive sedation. The required dosage differs between adults and children.

For adults, the usual dosage is 1 tablet in 5 or 10. It should be used once or twice a day, as recommended by your doctor.

For children six months and older, the recommended dosage is between 1 mg and 3 mg, applied three or four times a day.Valium should be taken for a short period of time. However, if you have been taking the drug by mouth for, say, two months, consult your doctor before stopping treatment. If you have been using Valium regularly and want to stop taking it, do so gradually to avoid withdrawal symptoms.

If you are elderly or have liver or kidney problems, your doctor will prescribe a lower dose for you. The usual adult dose may be harmful to you. So always follow your doctor's instructions. Valium pills should be swallowed whole with a glass of water. They can be used with or without food.

Contraindicated in newborns and infants under 6 months

Can you mix Valium and alcohol? The effects of Valium are enhanced by the simultaneous consumption of alcoholic beverages. For this reason, alcohol consumption is discouraged.

The medicinal product must be stored in the dark.

Valium is a drug from the group of benzodiazepines, which is prescribed for the treatment of anxiety, tension and insomnia.

How fast does Valium work?

How long does Valium work?

The effects of Valium last for more than 12 hours.

How do I get a prescription for Valium?

The branded medication Valium is no longer distributed in Britain. There are only generics here. Since this preparation requires a prescription, it is only available with a valid prescription from a doctor. In order to buy Valium generic, one must see a doctor.

How quickly does Valium become addictive?

Dependence can develop in as little as 4 weeks of regular use.

Can I buy Valium over the counter?

No. Valium and all diazepam-containing medicines are only available in pharmacies and require a prescription in Britain. If you want to buy Valium or diazepam from a local pharmacy, you will need a prescription from your doctor.

Is Valium safe after the expiration date?

Expiry date means that the medicine must not be taken after the date stated on the package. Ask your pharmacist how to dispose of it correctly. Ask your doctor to write you a new prescription so you can buy diazepam or Valium when you need it.

Valium belongs to the group of benzodiazepines and is usually prescribed to treat various conditions like insomnia, anxiety, panic disorder, muscle spasms, etc. Because it is a benzodiazepine, it can be addictive. Therefore, this drug is only suitable for short-term treatment of anxiety and insomnia.

Valium was developed by Dr. Leo Sternbach, an employee of the pharmaceutical company F. Hoffmann-La Roche AG. It was first marketed in 1963 as a safe alternative to barbiturates.

From 1969 to 1982, this drug was in high demand and sales were almost uncontrollable until negative reviews dispelled the myth of diazepam's safety. After that, a prescription for this drug was introduced.

However, diazepam still occupies a large niche in the legal use of tranquilizers and anticonvulsants. It is available nowadays in the form of tablets, drops, suppositories and injections.

What side effects are possible with Valium?

When given in small doses, Valium drug has few side effects and is well tolerated. However, general side effects can include headaches, drowsiness, dizziness and temporary memory loss.

However, after long-term use, the following symptoms may occur:

Valium pills contain lactose. If you are lactose intolerant, talk to your doctor or pharmacist before taking this medicine.

Avoid grapefruit and grapefruit juice when using Valium tablets/drops/suppositories/injections as it increases the likelihood of side effects.

Tell your doctor about any comorbidities, especially those related to mental disorders, muscle disorders, respiratory problems, kidney disease, liver disease, and a history of glaucoma.

Valium passes into breast milk and can have adverse effects on a child. Therefore, it is not recommended for nursing mothers, as well as during pregnancy. If you become pregnant while using Valium, consult your doctor immediately and talk to your doctor before breastfeeding your newborn.

Reaction, perception and memory disorders can occur as a result of taking Valium. This impairs the ability to drive. The use of tools and machines is therefore not recommended.

If you suffer from myasthenia gravis, have liver or kidney problems, or have a history of heart problems, talk to your doctor before you buy Valium and take.

The active ingredient in Valium diazepam can interact with other medications. Before taking Valium, tell your doctor if you are taking any of the following medicines:

Can Valium cause dependency?

The benzodiazepines, including Valium, are not suitable for long-term therapy. Valium pills/ drops/ suppositories/ injections are intended for short-term therapy.

According to statistics, the addiction and withdrawal symptoms develop in the patients who have taken Valium for 4 weeks or more. After 6 weeks of treatment there is a risk of pharmacological dependence.

Addiction is most common in people who already have alcohol or drug addictions or who have serious mental health abnormalities (e.g., borderline personality disorder). The risk group also includes elderly patients and children, who require special care during treatment with Valium.

Long-term, uninterrupted use of Valium is associated with the risk of withdrawal syndrome, in which a person may experience severe symptoms. Stopping Valium abruptly sometimes results in depersonalization, photophobia, confusion, and other inappropriate mental responses. Therefore, Valium pills/ drops/ suppositories/ injections should be discontinued gradually.

Hello, I have been afflicted with panic attacks and anxiety since I was 23 years old. The Valium tablets helped me a lot. Because of fear of addiction I took the lowest doses. But that's enough for me.