Instructions for use Anafranil 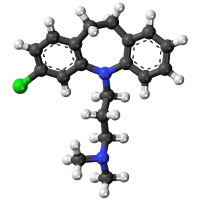 Anafranil belongs to a group of medicines called tricyclic antidepressants. The active ingredient is clomipramine hydrochloride. Anafranil acts on the central nervous system. This drug primarily affects the neurotransmitter serotonin by decreasing its absorption and thus increasing its levels. This reduces the symptoms of depression and anxiety.

It may take two to three weeks before you feel the full effects of this medication.

Swallow the tablets with a full glass of water. If your stomach is upset after taking the tablets, take them with a meal or after a snack. Anafranil is often taken once a day at bedtime to limit daytime sedation.

The optimal dosage varies from patient to patient. Anafranil is processed very slowly by the body. After you've decided on a starting dose, your doctor may wait two to three weeks before making any further adjustments. Your doctor may gradually adjust your daily dosage until you find the best response - that is, the lowest dosage at which you see the greatest improvement in symptoms without side effects.

For depression, obsessive-compulsive disorder, and phobias, treatment is usually started at a low dose of 50 to 75 mg per day. The dose can be slowly increased to 100 to 150 mg daily.

Once you are feeling better, your doctor may be able to reduce the dose slowly, usually to 50 to 100 mg per day.

For muscle weakness associated with narcolepsy, the dose is usually 25 to 75 mg per day.

If you're older than 65, your doctor will likely start you on a low dose (25 mg per day) to avoid the side effects. The dose will be increased gradually over about ten days to 50 to 75 mg per day and maintained at that dose for the rest of your treatment.

Do not buy Anafranil for treatment without medical consultation, as self-medication can be dangerous.

If you suffer from depression or anxiety disorders, this can provoke suicidal thoughts, especially at the beginning of Anafranil therapy. If you have suicidal thoughts at any time, seek immediate medical advice.

Anafranil interacts with many drugs. Before buying Anafranil and starting treatment with it, tell your doctor about all medications you are taking or using.

How does Anafranil work?

Anafranil has an antidepressant effect. It improves mood, drive, anxiety and other side effects of depression. It also reduces the symptoms of obsessive-compulsive disorder.

How fast does Anafranil work?

It may take two to three weeks before you feel the full effects of Anafranil.

Can Anafranil pills cause weight gain?

Can Anafranil pills cause impotence?

Yes, Anafranil 25mg can cause impotence. Both men and women can experience decreased sexual desire and an inability to achieve orgasm. In men, difficulty in maintaining an erection (impotence) or painful ejaculation can be observed. You should consult your doctor immediately if you encounter such problems while taking Anafranil.

Why to buy Anafranil?

If you have any of the following conditions, Anafranil 25 may be prescribed for you by your doctor: depression; obsessive-compulsive and panic disorders; phobias; sleep paralysis; Bedwetting as part of an overall therapeutic concept; Cataplexy or hypnagogic hallucinations in narcolepsy

Can you buy Anafranil without a prescription?

No, Anafranil is subject to a prescription in Germany. If you want to buy Anafranil, you should book an appointment with the doctor.

What is Anafranil used for?

Anafranil (generic name: clomipramine hydrochlorine) is an antidepressant taken by mouth that is used primarily to treat obsessive-compulsive disorder in adolescents and adults. It eliminates the uncontrollable obsessions (recurring unwanted thoughts) and repetitive behaviors. The safety of its use in children under 10 years of age has not been studied. The safety of long-term use in adolescents aged 10 to 17 years has not been established.

It is not recommended for bipolar disorder with manic and depressive episodes as it can lead to mania in some patients.

Anafranil pills should not be combined with stimulants such as amphetamines as they increase the effects of the stimulant. Caution should be exercised when prescribing Anafranil to patients suffering from heart disease.

In what dosages to buy Anafranil?

Anafranil is produced by RIEMSER Pharma GmbH and Novartis Pharma GmbH in the form of coated tablets (dragee). These manufacturers make the preparation available in 10mg and 25mg dosages.

What are the side effects of Anafranil pills?

Before buying Anafranil, consider a list of possible side effects. The most common side effects of Anafranil are similar to those of other tricyclic antidepressants and are as follows:

Other serious side effects include an increased risk of suicide or suicidal thoughts and attacks. Taking Anafranil pills may affect your ability to use machines.

If side effects are bothersome or won't go away, talk to your doctor. Most people who take this drug do not experience any of these side effects.

Patients should be closely monitored and observed for worsening depression, behavior changes, or suicide. Tell your doctor about any mental health problems, including a family history of suicide, bipolar disorder, or depression.

Anafranil can induce new psychosis, delusions and paranoia or aggravate existing ones. Call your doctor at once if you or your child develop new or worsening mental symptoms, such as hallucinations or confusion.

This drug can trigger a psychotic episode in patients with previously undiagnosed schizophrenia.

Anafranil treatment may increase the risk of concomitant treatment of depression with electroconvulsive therapy. Talk to your doctor about liver function problems or blood disorders. Rarely, Anafranil can cause dangerous side effects in patients with liver disease or conditions such as anemia and leukopenia.

How do you stop taking Anafranil?

Stopping long-term treatment with Anafranil suddenly or prematurely can lead to withdrawal symptoms such as restlessness, nausea, vomiting, abdominal pain, sweating, diarrhea, headache and anxiety. You can be overly nervous and sleepy for no reason.

To avoid these symptoms, you should stop taking it gradually and under medical supervision.

Anafranil pills and alcohol: is this combination dangerous?

Taking Anafranil with alcohol beverages at the same time can increase certain side effects or even interfere with the intended effect of the drug. If a patient experiences uneven heartbeats, extreme drowsiness, increased confusion, or agitation, they should seek immediate medical attention. Rarely, mixing Anafranil with alcohol can cause serious side effects such as vomiting, blurred vision, excessive sweating, muscle stiffness, or seizures. Therefore, alcohol consumption is not recommended during therapy with Anafranil.

How much does Anafranil cost in a pharmacy?

The price of Anafranil depends on the dosage, manufacturer, pack size and pharmacy where you buy it. Before you buy, compare the prices in German and international online pharmacies to order cheap Anafranil.

On our portal you can quickly find out more information about medicines and compare prices for medicines.

Does Anafranil interact with other medications?

Because Anafranil can interact with a number of drugs, discuss with your doctor any other prescription drugs you are taking or using before beginning Anafranil therapy.

You must avoid Anafranil if you are taking monoamine oxidase inhibitors (MAOs) or CNS depressants such as alprazolam and diazepam. This can lead to a serious or fatal drug interaction.

Be careful if you are taking Anafranil with anticholinergic drugs such as atropine, certain medications used to treat high blood pressure, cisapride, digoxin, thyroid mediation, blood thinners such as warfarin, and antiplatelet drugs such as aspirin or ibuprofen.

Drugs that cause drowsiness can affect heart rate and blood pressure when given at the same time as anaftranil.

Cigarette smoking can decrease plasma levels of clomipramine. Tell your doctor if you smoke or have recently quit smoking.

I am a 26 year old female and have been taking Anafranil since 2018. I like this drug very much! Why? Because it causes minimal side effects and is very effective. It helps me a lot with obsessive-compulsive disorder)!